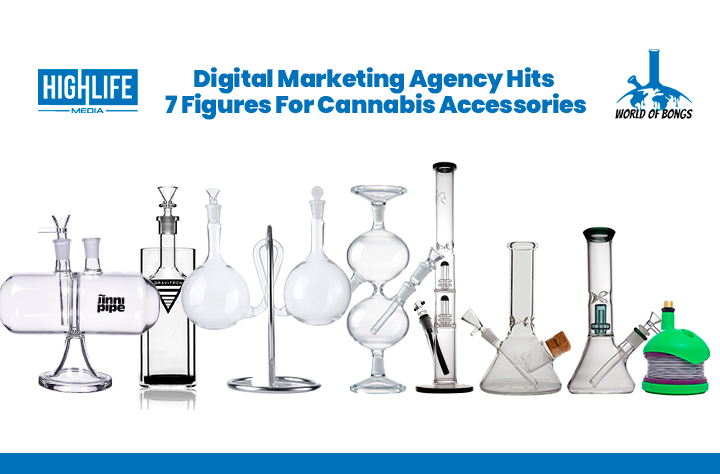 It is one of the biggest names in the booming cannabis industry. With over 25,000,000 followers on her social media platforms, much of it from the United States despite being located in Switzerland, she has the largest cannabis community online.

Highlife Media, led by CEO and owner Marco Cadisch, has become a household name for consumers and marketers. In just one year, Highlife Media has gone from being an agency solely dedicated to growing its clients’ cannabis brands to managing its own brand backed by a loyal following. During this short period, Cadisch ran an e-commerce brand dedicated to selling cannabis accessories, while ensuring that the transition between lenses was smooth.

The world of bongs, the name of Highlife Media’s online headshop, reached over seven figures in revenue in 2022. In just one year, World of Bongs became one of the top 10 selling headshops for its product. Due to Highlife Media’s tenacity, forward-thinking mindset and passion for its clientele, this marketing agency-turned-retailer has grown beyond its original consulting roots to become a multimillion-dollar e-commerce company. in the cannabis industry.

The story of Highlife Media

In 2016, the year the agency was founded, Highlife Media found itself in the throes of navigating a slowly growing market as cannabis legalization spread. Due to these external factors impacting the industry, Cadisch discovered a marketing niche: promoting cannabis brands and erasing the stigma surrounding products in the process.

Highlife Media was born from this desire to help brands reach audiences, those who would have had difficulty doing so otherwise. Cannabis companies struggle to promote themselves because Facebook, Instagram, and other social media platforms don’t run ads with their products.

Google Ads also restricts advertising for these products – another significant hurdle for budding cannabis businesses, which already face the challenges that any startup faces when first set up. This is where Highlife Media steps in and acts as a middleman for these cannabis brands: the middleman between a budding company and an audience hungry for the freshest products.

Since 2016, Highlife Media has managed to promote more than 100 different cannabis brands, thanks to its effective and relentless marketing strategies. The network reaches over 100,000,000 million impressions per month only, a number difficult to conceive even in one’s imagination. Given the colossal number of monthly visitors, working with Highlife Media’s agency is powerful fertilizer for a cannabis brand that is struggling to sprout and sprout through the harsh, rocky soil of an internet landscape that, by its design, does not seek to support the industry.

Using the strength of their social incentives and targeted marketing campaigns, Highlife Media is able to give these small businesses a chance to be seen and successful by an audience that might otherwise not have noticed them. The three systems of agency, brand and clientele are symbiotic, supporting each other so that the other gets what they want. No other marketing agency in the cannabis industry has had the same level of influence that Highlife Media has had. Modern and engaging, Highlife Media’s mission of growing cannabis brands’ following through its expertise in marketing and branding, web design and, of course, monthly impressions, has been second to none over the past few years. years of the cannabis industry game. Now their eyes are elsewhere.

After a few years of only marketing to other cannabis brands, Highlife Media set their sights on creating their own brand, turning it into one of the biggest in the industry. In March 2021, plagued by an economy trying to find its feet due to the turmoil of COVID-19, Cadisch invested six figures in a warehouse and fulfillment team for its e-commerce brand, World of Bongs. A year later, World of Bongs is one of the top 10 online stores in the world, generating 7 figures in sales in this short period. World of Bongs is home to the largest community of glass lovers on social media, with over 3,000,000 followers on their pages. The online retailer sells a staggering array of glass pipes, bongs, dab rings, bowls, and just about any other accessory a cannabis connoisseur could want. As the cannabis industry continues to grow from increasing legality in the United States and other parts of the world, the kingdom of World of Bongs will expand alongside it, continuing to generate the massive amounts that it produced in a quick period of time.

What is particularly remarkable about the company Highlife Media is how their presence has been developed from the ground up. From this minimal baseline, Highlife Media has grown to have the largest social network following in just six short years. At a time when so many startups are vying for visibility on the all-consuming internet scene, Highlife Media’s growth under Cardisch’s tenure is exceptional.

One case study in particular exemplifies the growth-oriented and forward-thinking mindset of Highlife Media, and that is the creation of over 260 business leads for Green Investments, a company dedicated to growing farm businesses. of cannabis in the State of California. Whoever invests in the business invests as a partner, regardless of the size of the initial investment. Approaching Highlife Media in a bid to reach potential new investors, the two companies worked together on a sprawling social media campaign, curating careful postings and ad placements. Through their collective efforts, Highlife Media was able to help Green Investments by generating over 200,000 impressions and 500 social shares. The result? The big increase in leads and revenue, as mentioned earlier.

The same growth and reach success is also on display with World of Bongs and Cardisch’s other e-commerce site, Stoner Merch. Each website receives millions of visitors with a solid income of millions of dollars. Already considerable achievements on several fronts, the successes of these companies seem destined to prosper. However, that doesn’t mean there haven’t been speed bumps in the road for Highlife Media.

Developing a brand is difficult – an understatement in itself. Many startups are floundering, unable to match the push demanded by internet search algorithms and search optics. When you work in an industry riddled with countless stigmas across audiences and the platforms these brands are trying to thrive on, this is all the more true. Working in the cannabis industry means working with a multitude of restrictions surrounding your product. Banks, insurance agencies, credit card companies, and processing are all ingrained with a number of restrictions that a budding business must work with and circumvent to be successful. For this reason, even having the means to launch and work with the fundamental components necessary for a successful brand will be more difficult compared to other industries.

Any issues regarding how difficult it is to dance to the relentless music of the social media algorithm will be magnified even more when you work in the cannabis industry. Overall, there is censorship from these social media companies, which seek to silence cannabis brands, whether through advertising or by refusing to push their pages to an audience. Highlife Media and other companies have witnessed the mass deletion of dedicated Instagram accounts, influencer pages, and even things as innocuous as cannabis-themed weed pages. Brands must remain vigilant because of this, lest they break a new secret rule and face the consequences of shutting down their entire operations.

Despite the huge presence of Highlife Media, they are no exception to the rule and must be vigilant in their behavior on social networks. When analyzing their success from the perspective of the inherent challenges that brands in the cannabis industry face when growing their business, Highlife Media’s growth becomes all the more remarkable.

In the coming years, Cadisch seeks to position Highlife Media, World of Bongs and Stoner Merch as masterclasses in their respective services and products. Highlife Media will continue its mission to promote the best of the cannabis industry, establishing itself as one of the leading media companies in the United States. The world of bongs and Stoner Merchandise to thrive in e-commerce, continuing the rapid rise in revenue.

Over the next two years, Cadisch aims to grow these two brands to more than 8 figures.

When asked for wisdom or advice, Cadisch stresses the importance of consistency, the balance between hard work and risk taking, and how vital networking and kindness are.

From an agency designed to connect brands with audiences to now grown to be so much more than that, it’s easy to see why Cadisch cares about collaboration at the micro and macro levels. Considering his accomplishments in his new business ventures in a single year amid a sometimes fragile economy and the rapid growth of the cannabis industry itself, the sky is only the limit for Marco. Cadisch and everything he hits. for the sequel.