Do you think the Titanic tragedy was inevitable because it spotted the iceberg too late?

So consider this. The British Board of Trade inquiry, a month after the disaster, concluded: “Captain Smith had disregarded ice warnings…and the collision was the direct result of entering a dangerous area at a speed too high (twenty-two knots).”

The ship was also terribly unprepared. The Titanic could carry 48 lifeboats, it had 20, enough for only half of the passengers on board. The crew was not well trained in emergency evacuation procedures, so they did not know how many people could safely fit into a lifeboat. Panicked officers lowered numerous half-filled lifeboats.

You get the picture. It was a disaster, but avoidable.

In David Lean’s “Lawrence of Arabia” you see Peter O’Toole and his guide near a desert well. While quenching their thirst, they see a blurry black dot on the horizon. As the black shape gets closer, it becomes lighter and larger. The figure dressed in black turns out to be a stranger – Omar Sharif – who, once within range, quickly shoots the guide who is still drawing his pistol.

Some brands are like this: by the time they understand the implications of the signs they’ve seen, they’re dead.

Do you remember the iconic photographic film company that invented the digital camera? He was so blinded by his profitable film business that he could not see the future of digital photography. However, he went bankrupt.

Remember how the CEO of the world’s leading maker of software for personal computer operating systems and office productivity, laughed at the introduction of the smartphone, wondering why people would pay hundreds of dollars for a phone? whose battery charge didn’t even last a day and, worse, had no physical keyboard? Trying to catch up in the smartphone market later, the company lost US$8 billion from a failed acquisition of a mobile phone company. In an interview with a venture capital firm in June 2019, the software maker’s co-founder and first CEO said the company lost $400 billion in revenue by missing out on the smartphone market.

For all of these brands, the warning signs – from contextual changes to disgruntled customers to budding technological innovation – have been evident for some time. Lacking perceptual acuity, their instinctive response was to deny, to reject, to delay. They really didn’t have to end up like a deer staring at the headlights of an oncoming car.

Check out this week’s Strategygram below: 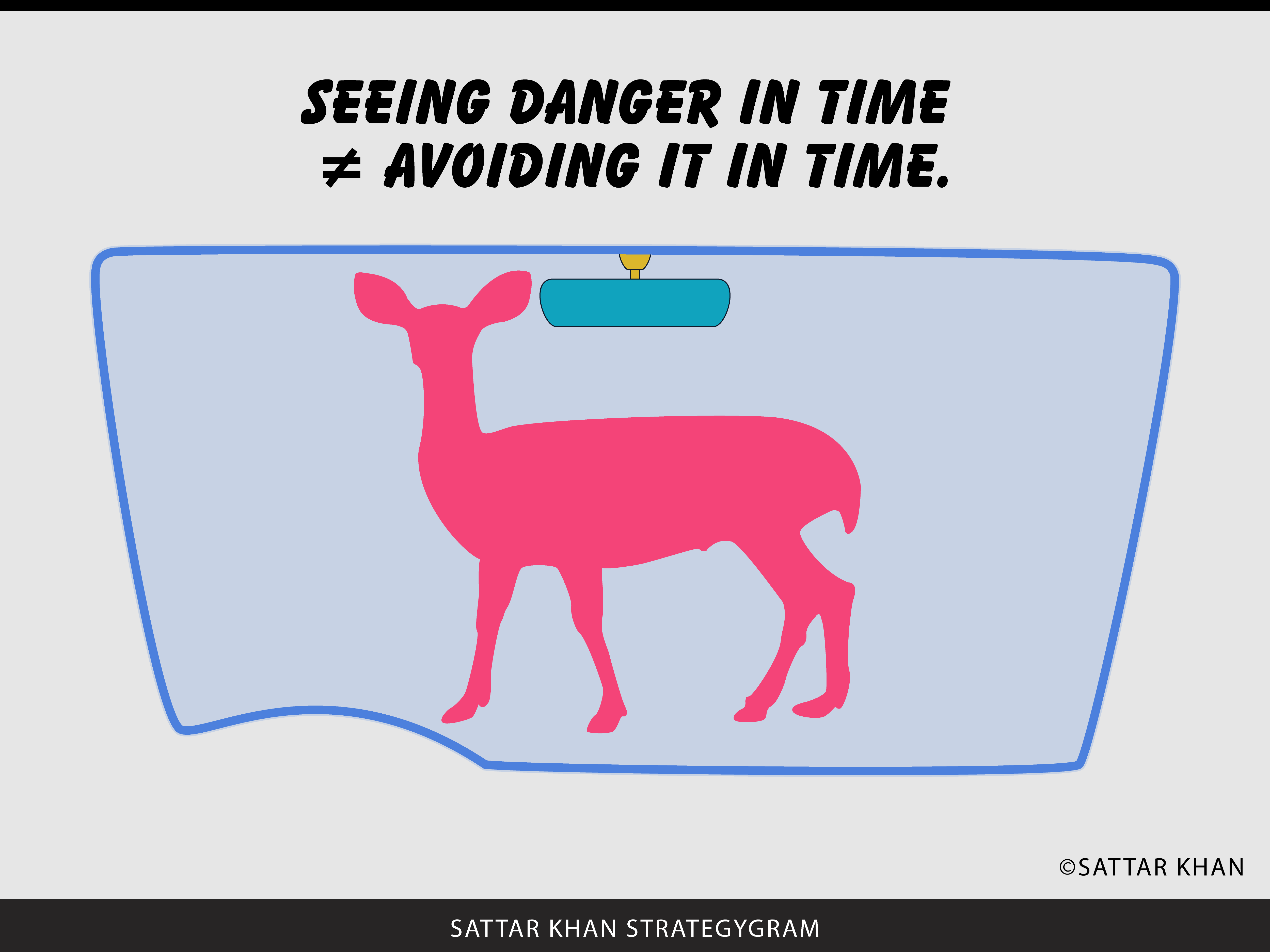 Check out the first fifteen Strategygrams: “Speed ​​Kills”, “Half Bridges Don’t Work”, “No Contest”, “The Silent Clue”, “Who’s For Lunch?” ‘, ‘Competition Is A Monster’, ‘The Distinctive Sells The Difference’, ‘Strategy as History’, ‘Timing Beats Speed’, ‘Conquering Fort Customer’, ‘How Are You Different?’, ‘The Villain and The Hero Inside ‘, ‘Galileo’s Discovery’, ‘The Strategic Logic Chain’, and ‘The Brand Experience Trio’.

-Sattar Khan can be contacted at sattar1000@gmail.com.